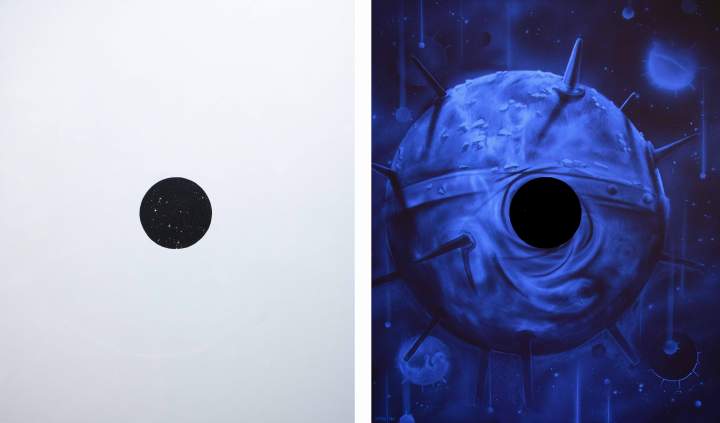 2018-2019 series Genesis
Genesis is finding its perfect form today in the genetic code. Countless observations confirm the hypothesis that the inner world of the body is directly derived from the primordial forms of life. The most notable fact is the ubiquitous presence of a DNA molecule.
Genetic material of all known organisms on earth is largely composed of nucleic acids DNA and RNA, which contain
in their structure information passed down from generation to generation and more than capable of selfreproduction and imitation. Our life is a simulator at the genetic level.

Canvas Genesis is made of ultraviolet invisible paints that glow under the influence of ultraviolet light. Under normal light, the canvas looks white (white canvases), and the picture only appears when the viewer directs the UV light to work.

Genesis. Center
The sun gives life, and in its excess death. The metaphor of luminaries and celestial bodies is underwater mines that have absorbed various biological and informational data. The explosion may have caused life on our planet, created our galaxy, and in it 1000 solar systems – “mine fields”. All the debris mixed together, beginning the genesis.